This post describes a new version 3 of well-known protocol Chip Authentication, which is used in context of eID to authenticate the chip and to establish a strong secure channel between chip and terminal.

In context of the European eIDAS regulation, the German BSI and the French ANSSI have specified in TR-03110 a new version 3 of protocol Chip Authentication (CAv3). It bases on ephemeral-static Diffie-Hellman key agreement, that provides both secure communication and also unilateral authentication of the chip. This new protocol is an alternative to Chip Authentication Version 2 and Restricted Identification (RI) providing additional features. CAv3 provides the following benefits (see TR-03110 part 2):

Before CAv3 is started the well-known protocol Terminal Authentication Version 2 (TAv2) must performed because the terminal’s ephemeral key pair generated during TAv2 is used during CAv3. It is also recommend that Passive Authentication is performed before CAv3 to assure the authenticity of chip’s public key. 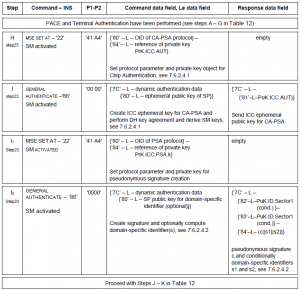 The protocol CAv3 consists of the following two steps (where terminal and eIDAS token are involved):

Additionally, the received sector-specific identifier can be checked if it is black-listed (or white-listed).

On this way the new protocol CAv3 can be used in addition to sign data under a chip and sector specific pseudonym as an alternative to Restricted Identification.