Currently you can find the well-known test tool Titan under the patronage of the Eclipse Foundation (proposal). This tool was developed by Ericsson several years ago to the test internet protocol (IP). Titan bases on TTCN-3, a test language focusing on communication protocols. This keeps me in mind an old project with ETSI where we used TTCN-3 to test ePassport readers concerning BSI TR-3105 part 5.1.

From end of 2009 to middle of 2011 ETSI has conducted a project to develop a test system prototype for conformance testing of ePassport readers. The objective of this project was to design, build and test a TTCN-3 (Testing and Test Control Notation, Version 3) based test system prototype for ePassport reader conformance testing. This project was a joint effort between the European Joint Research Centre (JRC) in Ispra (Italy) and ETSI in Sophia Antipolis (France). The test language TTCN-3 has already been widely used in many testing projects across different protocols and technologies. However, until this project TTCN-3 has not been applied in the area of contactless smart card testing.

Scope of this project was to build a test system to test an inspection system typically used to read ePassports. To demonstrate the basic functionality and the feasibility, a subset of BSI TR-03105 Part 5.1 was specified and implemented in the test system.

The following image describes the architecture of the ePassport reader test system developed during this project: 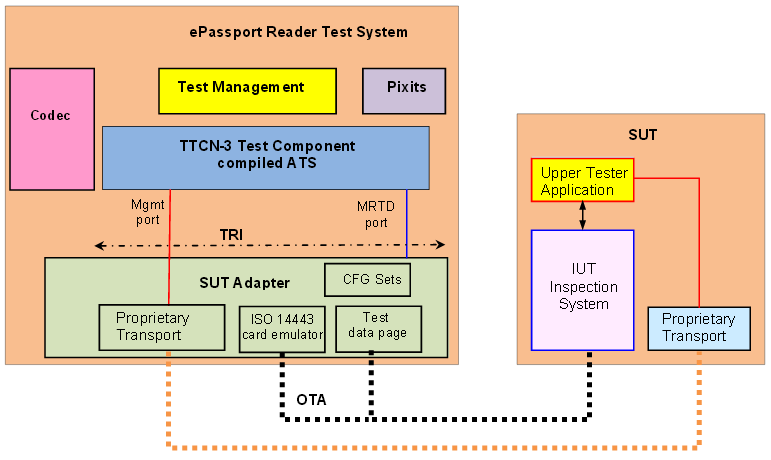 Architecture of test system based on TTCN-3 for ePassport readers (Source: ETSI White Paper No.7)

The most significant part in the architecture is “TTCN-3 Test Component”. This module simulates the ePassort behaviour  by receiving APDUs, react to these commands and send result in APDUs back to the SUT (here the ePassport reader).

The successful implementation of a TTCN-3 based test system shows that the use of TTCN-3 fits the requirements of conformance testing of eMRTD or other eID systems. The prototype demonstrates the feasibility of using such formal techniques for protocols which would improve the quality and repeatability of tests and reduce room for interpretation.

An overview of this project and the results were summarized by the colleagues Jean-Marc Chareau, Laurent Velez and Zdenek Riha in ETSI White Paper No 7.