Back in office after three weeks holiday I would like to show you now one of the high level results doing all these interoperability tests in the domain of ePassports. Today a German consortium (i.a. Bundesdruckerei and Secunet) won a tender for biometric-based eGates rolled out across the country in the next years at several airports. These eGates use well-known protocols as Basic Access Control (BAC) or Supplemental Access Control (SAC) to establish a secure channel between reader and smart card of ePassport via ISO 14443 interface for contactless smart cards. An automatic border control (ABC) like this allows passengers in less than 30 seconds to pass the gate. Currently you can find an alternative of such systems at the airport in Heathrow.

The following figure shows a typical simplified workflow of such a border control system: 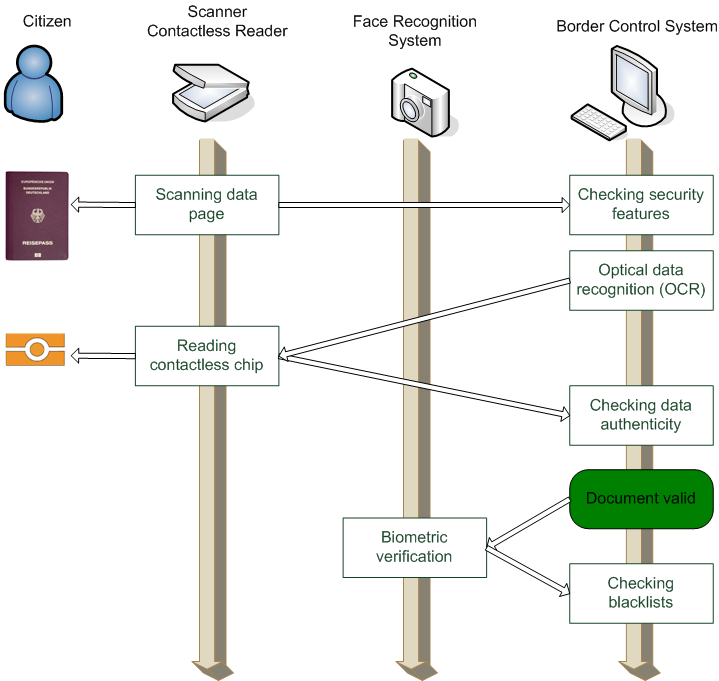 To reduce waiting time for passengers the system is using an automatic process. At the beginning the citizen is passing the gate by showing his ePassport. An inspection system scans the machine readable zone of the data page to derivate a cryptographic key to get access to the contactless smart card. As soon as all data groups of chip are read, the inspection system verifies the authenticity of the data to assure validity of the current ePassport chip. In the meantime the face recognition system scans the citizen to get a facial image of him. This image is being compared with the facial image of the chip (biometric verification). If both images are similar and the ePassport is not blacklisted, the citizen can pass the gate.

The results of the InterOp test 2013 concerning the new protocol SAC (Supplemental Access Control) are available. The test event was split into two slots – a conformity test (to test if the document conform to the latest ICAO standards) and a crossover test (to test, if each document can be read by the inspection system). A concluding test report is available here. Thanks to Mark Lockie and Michael Schlüter for organizing this successful event.

Next week another ePassport interoperability test takes place in London. The community will join to test their next generation smart cards in ePassports with the new protocol Supplemental Access Control (SAC) as a replacement of Basic Access Control (BAC). BAC was designed in the beginning of this century and will be replaced by SAC in December 2014 latest. The protocol SAC bases on the well known protocol Password Authenticated Connection Establishment (PACE) that was mainly developed by German BSI and that is also used in German ID cards issued since November 2010. PACE is specified in TR-03110.

During the interoperability test vendors of chips and inspections system will test their implementations against current conformity test suites of several test labs. More information can be found here: InterOp 2013.

See you in London!